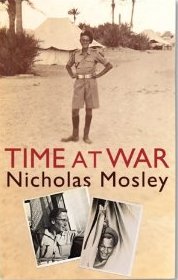 Although he has previously published an autobiography, Nicholas Mosley has hitherto avoided writing about his WWII experience, in which his tangled relationship with his father, Sir Oswald Mosley, leader of the British fascist movement, plays a major part.

TIME AT WAR shows Mosley coming of age as a young officer in the forcing house of war and being despatched as part of the Rifle Brigade to join the allies as they fight their way up Italy. At one point he ignominiously loses most of his platoon. Eventually he leads his men to capture a strategic farmhouse not far from Monte Cassino and wins the MC.

Mosley gives his account against the backdrop of being the son of Britain’s fascist leader who was imprisoned with his second wife (Diana, one of the Mitford sistrs) in Brixton jail not long after the outbreak of war. What would have happened if Nicholas had been captured by the Germans and then identified?

In fact at one point in the Italian campaign this happens. How he survives demonstrates that fact can sometimes be more bizarre than fiction.

TIME AT WAR is both an absorbing war memoir and intriguing account of a relationship unlike any other in WWII. How do you live your life when Britain is fighting the axis powers when your father is the self-proclaimed British fascist leader?