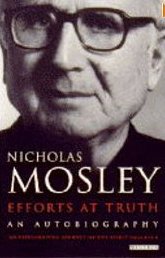 Nicholas Mosley brings the unblinking probing of a scientist to bear on the workings of the writer’s imagination. The result is a constantly stimulating, frequently startling, and always cheerfully unorthodox autobiography. As a novelist, biographer, editor, and screenwriter, Nicholas Mosley has always been concerned with the central paradox of writing: if by definition fiction is untrue, and biography never complete, is there a form that will enable a writer to get at the truth of a life? In Efforts at Truth Mosley scrutinizes his own life and work, but examines them as a curious observer, fascinated by the constant interaction of reality and the written word. As a life, it has been colorful, in settings ranging from the West Indies to a remote Welsh hill farm, from war action in Italy to battles with Hollywood moguls, from the Colony Room to the House of Lords. In print, the range has been as wide: editor of a controversial religious magazine, author of the acclaimed novel series Catastrophe Practice, screenwriter of his own work with Joe Losey and John Frankenheimer, biographer of his notorious father Oswald Mosley, and, in 1990, winner of the Whitbread Award for his novel Hopeful Monsters.