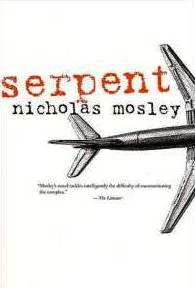 Jason is a scriptwriter working on a film about Masada–the fortress where a thousand Jews killed themselves rather than be taken prisoner by the Romans in A. D. 73. He doubts that a film both honest and popular on such a subject can be made, and, while en route to the production site (Jason, producers and stars in first class–his wife and child in tourist), a dispute about the film and a crisis aboard the plane forces Jason to look at his life, his art, and the world around him in several different ways at once.

“Nicholas Mosley is a brilliant novelist who has received nothing like the attention he deserves.” – Robert Scholes, Saturday Review

“Serpent” is an engrossing, if not an explosively original book.” – Boston Review