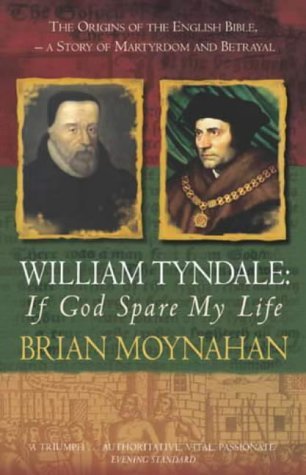 William Tyndale: If God Spare My Life: Martyrdom, Betrayal and the English Bible

William Tyndale (1494 – 1536) is one of the most famous of history’s martyrs. Being out of sympathy with the contemporary English church and suspected of heresy, he left England in 1522 and matriculated at Wittenberg two years later. Here he got to know Luther. In 1525 he translated the New Testament and the Pentateuch by 1531. He had reached the book of Jonah when he was burned for heresy near Brussels.

Brian Moynahan’s brilliantly written account ties no less than Sir Thomas More, newly named patron saint of politicians, to the betrayal and burning of Tyndale. The extraordinary feud between the two men has never been shown in such detail before. The book also included vivid portraits of Henry VIII, Catherine of Aragon, Anne Boleyn and Cardinal Wolsey. Burnings alive, early printing, book smuggling, and the linking of More, ‘the man for all seasons’ to the betrayal and execution of the most quoted writer in the language (84% of the King James New Testament is word-for-word Tyndale) – these are the backdrop to one of the most astonishing lives in British history.