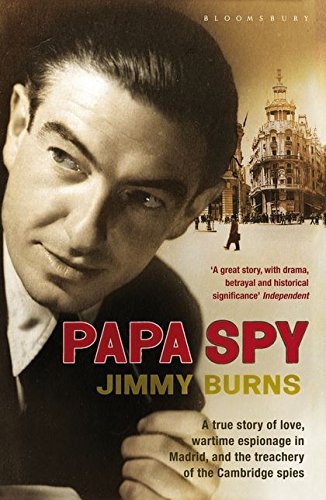 Papa Spy: A True Story of Love, Wartime Espionage in Madrid, and the Treachery of the Cambridge Spies

In the 1930s Tom Burns was a rising star of British publishing, whose friends and authors included G. K. Chesterton, Evelyn Waugh, Graham Greene, the artist Eric Gill and the poet David Jones. And among his glittering social circle he had set his heart on the beautiful Ann Bowes-Lyon, cousin of the Queen.
When war was declared in 1939, Burns joined the Ministry of Information, effectively the propaganda wing of the secret services. Sent to Madrid as press attaché at the British Embassy, where the Ambassador was the formidable and very Protestant Sir Samuel Hoare, Burns used his faith and his deep love of Spain in the propaganda war against the Nazis, who at the time had pretty much unrestricted access to the Spanish media. Burns’ brief was to do all in his power to keep Franco neutral and so protect Gibraltar and access to the western Mediterranean.
The strategy was simple, but the tactics were more complicated, especially when Burns found he had begun to make enemies at home, not least among them Kim Philby and Anthony Blunt, head of the MI6’s Iberian section. By 1941 he felt far from the real fighting, Ann had pledged herself to another man, and Burns was spending as much time protecting his back as fighting the Nazis. How he overcame these odds, was involved in the Man Who Never Was decoy plot, arranged Leslie Howard’s fatal propaganda trip to Portugal and Spain, and finally found true love while loyally serving his country is the story told in this extraordinary book by his son.