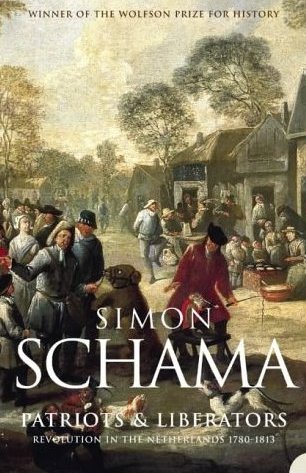 Patriots & Liberators: Revolution in the Netherlands 1780-1813

Simon Schama’s landmark study of the Netherlands from 1780–1813 is a tale of a once-powerful nation’s desperate struggle to survive the treacheries and brutality of European war and politics.
Between 1780 and 1813 the Dutch Republic – a country once rich enough to be called the cash till of Europe and powerful enough to make war with England – was stripped of its colonies, invaded by its enemies, driven to the edge of bankruptcy, and, finally, reduced to becoming an appendage of the French empire – an appendage not even the French seemed to value overmuch. Out of these events Simon Schama has constructed a gripping chronicle of revolution and privateering, constitutions and coups, in a tiny nation desperately struggling to stay afloat in a sea of geopolitics.

Like his classics The Embarrassment of Riches and Citizens, Patriots and Liberators combines a mastery of historical sources with an unabashed delight in narrative. The result confirms Schama as a historian in the finest tradition – one whose study of the past reveals volumes about the present. This is one of our most revered historians’ greatest works, and this new Perennial edition will reintroduce his genius to a new generation of readers.