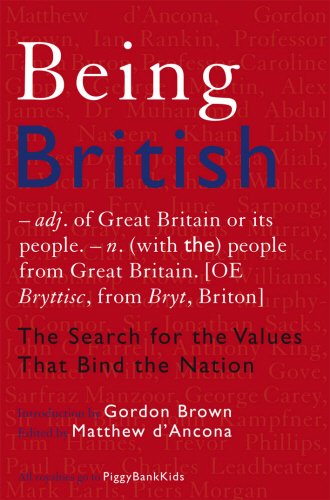 Being British: The Search for the Values That Bind the Nation

What does being British actually mean today? Depending on your age, it can conjure up imagery of the Battle of Waterloo, Queen Victoria’s Empire, the British Lions rugby team or that famous Union Jack dress Geri Halliwell wore at the Brit Awards. In the twenty-first century, Britain – like many Western countries – enjoys a diverse racial mix. Therefore, as with the USA, we need to explore the values and cultural reference points around us to fully understand what it now means to be a British citizen.

Twenty contributions written by well-known individuals representing a cross section of Britain’s cultural landscape attempt to offer an insight into, or snapshot of, how Britons today see themselves and their place in the world. Their thoughts will highlight just how divergent our society is and where its strengths and weaknesses lie.

All these views are championed by two unlikely collaborators – Spectator editor Matthew d’Ancona and Prime Minister Gordon Brown. Often politically opposed, they share a passionate interest in exploring what is meant by being British. This unique book will enlighten, inspire and stir up many debates but ultimately it will provide a path for any reader wanting to understand just what it is to be British in the new millennium.