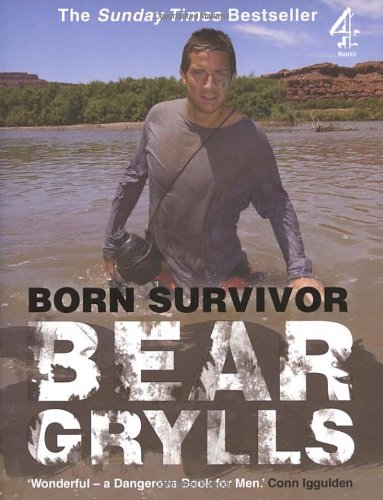 Bear Grylls is no stranger to extremes. During a three-year stint in the SAS he was involved in a horrific parachuting accident in Africa and broke his back in three places. Months of rehabilitation followed but, never losing sight of his childhood dream of climbing Everest, Bear went on to become the youngest Briton ever to reach the summit and survive. It was a close-run thing, however, as during the descent he was almost killed in a crevasse, his life saved only by his team-mate and a rope.

In 2003 Bear completed another world-record-breaking expedition, leading his team through freezing spray and icebergs across the North Atlantic Ocean in a small inflatable boat. More drama followed as Bear, a karate black belt, set out to show the viewers of Channel 4 what it is really like to complete the gruelling basic training of the Foreign Legion.

In Born Survivor the world’s ultimate survivor shows us how to stay alive in the most unforgiving conditions on Earth. From crossing piranha-infested rivers and finding fresh food to building bush fires and fighting off grizzly bears – all manner of survival techniques from our most dangerous environments are covered. So, whether you find yourself stranded on a desert island in the Pacific, lost in the Lake District, or stuck in the snow on Greenland, once you’ve read this book, you too will be able to beat the elements and survive the wild.