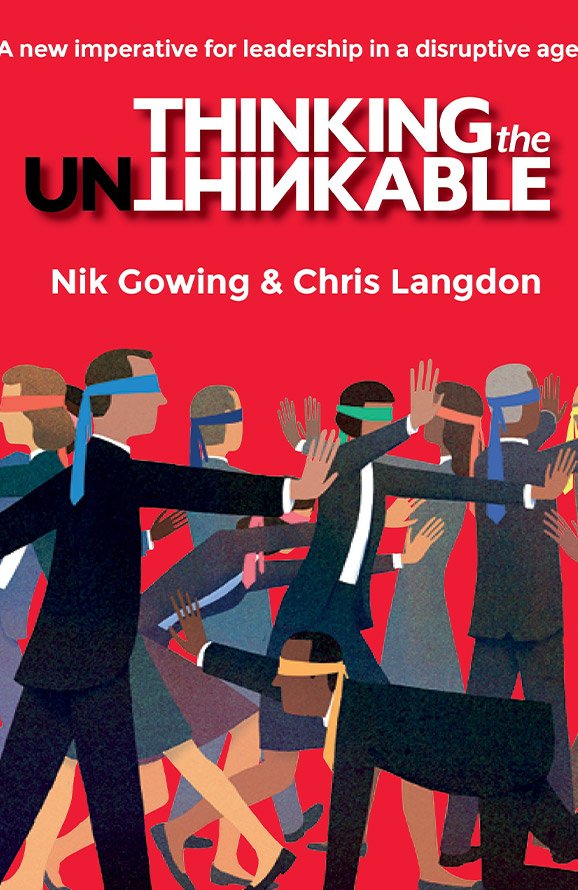 Executive leadership faces new vulnerabilities. Many leaders privately concede them, but few are willing to talk publicly about them. ‘Unthinkable’ events since 2014 have revealed a new leadership fragility at the highest levels. And the pace of change in 2018 shows that the uncertainties are greater than ever. Is this the ‘new normal?’

Thinking The Unthinkable is an investigation into why leaders have appeared more unable or unwilling than ever to anticipate the biggest issues of our time.In an era of ‘wicked problems’ why are current leadership behaviours and culture apparently not fit for purpose? What are the causes of so many failures in policy and strategic forecasting? Are they human frailties? Or are they systemic failures to embrace smartly new realities?

Through hundreds of interviews and conversations, Nik Gowing and Chris Langdon have analysed the deep new challenges to the human capacity of leaders at the highest keels to accept, understand, embrace then handle the extraordinary processes of change and disruption.

This essential book draws on the candid responses. The findings will be disconcerting to leaders at all levels.

This is an amazing piece of work! It deals with the little known irony: that those with the most decision-making power often feel under the most pressure to conform to the systems and norms around them. This explains why our institutions – whether national, regional or international – have been caught off guard. And why we are stuck in reactive rather than proactive – mode. The need for a strategic overhaul in our thinking is widely acknowledged, though few know how to go about it. I think giving a copy of this book to every world leader would be a good place to start. —Miroslav Lajcak, President of the UN General Assembly, Foreign Minister of Slovakia

I can say, very genuinely, that this book is hugely important. But it is also difficult because it is human nature to react to crises but not to prepare for and pre-empt them. It is also very different today from what it used to be because of the multiplicity of possible crisis events that can overlay each other. We simply do not have the capacity to deal with more than one crisis at a time. I was very impressed by the work Nik presented when he came to the Bank.” –Kristalina Georgieva, CEO, The World Bank

This book it timely, scary and important. One hopes it will be widely read – and that it will resonate with those in demanding senior roles in both public and private sectors who are overwhelmed by the fast-changing and complex challenges they confront. Still more importantly, one hopes that it will trigger wide debate and thereby help to reduce the probability of the ‘unthinkable’ setbacks that threaten our current civilization – threats about which too many people are still in denial. –Lord Martin Rees, Astronomer Royal, Founder of the Centre for the Study of Existential Risk, Cambridge University

‘With so much change in business and in the political arena, you can either play safe in responding, or – as this wonderful book encourages the reader – you can “thrive on change”. Thinking the Unthinkable urges leaders to engage with ideas that may appear – or may be in the short run – disruptive but will lead to innovative outcomes, products and services. This is a must read for all leaders in all sectors!’ — Professor Sir Cary Cooper CBE, Alliance Manchester Business School, Co-author, The Myths of Management (2017)

‘There is constant change and many seismic events have swung the course of history. However as a student of history I believe that viewed in 100 years’ time the issues of today will be seen as a landmark. In Thinking the Unthinkable, Nik and Chris will challenge and inspire you {in equal measure} to do just this. Every modern leader should both read it and embrace it.’ — Katherine Garrett-Cox, CEO of Gulf International Bank (UK) Ltd.

‘Globalisation and its perceived unfairness to people and planet is leading to calls for change. Capitalism, at its rawest, is being challenged as the preeminent economic model. At the same time the dawning of the digital era is creating new paradigms in how we live and work. Fear, uncertainty and discontent is growing. Politicians and businesses are struggling for the answers. The age of the power of nation states is drawing to a close. But what will replace it? In this thoughtful book the issues are explored, and a well reasoned case put forward to Think the Unthinkable.’ — Lord Mark Price, Author of Fairness for All (2017), Managing Director of Waitrose (2007–2016), Deputy Chairman of the John Lewis Partnership (2013–2016), Minister for Trade and Investment (2016–2017)

‘A connected world is a complex world. Once stable sand piles are cascading all around us in the economic, social and political and strategic domains. As some of today’s most important government and corporate leaders confess to authors Nik Gowing and Chris Langdon, they feel helplessly behind the pace of change. And yet: we are all price takers, but we are not helpless. Read this important book for guidance on navigating a world of unthinkables.’ — Dr Parag Khanna, Author of Connectography: Mapping the Future of Global Civilization (2016)