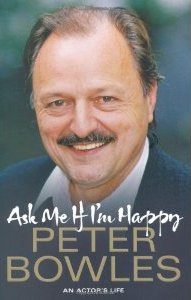 Ask Me If I’m Happy

One of Britain’s best-loved comic actors, Peter Bowles is perhaps most famous for his role as nouveau riche lord of the manor, Richard de Vere, in the hit television comedy To the Manor Born. The show earned itself cult sit-com status when it first aired in the 1970s and 80s and, as the success of the 2007 Christmas special showed, it continues to be hugely popular around the world.

Now, in this witty, charming and colourful memoir, Peter Bowles recalls experiences and anecdotes from the time as well as from countless other productions he has worked on during more than half a century in the business. From his early days at Stratford under the direction of John Osborne to roles on iconic television programmes like The Avengers and The Irish R.M., to his current work with the great Peter Hall, Peter Bowles has worked, and laughed, with some of the biggest names in British drama.

Funny, candid and warming in equal measure, Peter Bowles is the very personal story of this inspiring and quintessentially British actor.