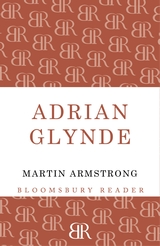 Adrian Glynde is a thirteen year old boy who has lost his father in WWI and has a troubled relationship with his mother. He struggles with loneliness, complicated family ties and the difficult reality around him as he attempts to grow up and figure out what kind of man he wants to become. Written in 1930 and set between two World Wars, this is a touching coming-of-age story that will be relatable to anyone who has ever felt out-of-place or alone, especially teenagers and preteens.