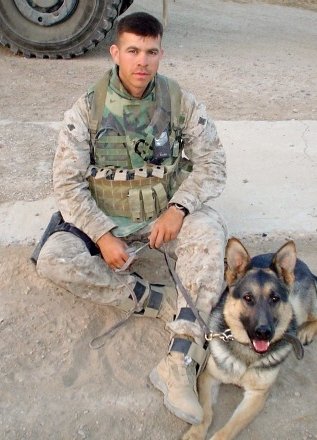 Sgt Mike Dowling enlisted in the US Marine Corps in 2001, having dropped out of university. He was assigned the role of Military Policeman (MP). Whilst at MP school he realized that he had the chance to train as a Military Dog Handler (MDH). He graduated top of his class, and entered a K9 training school. Upon completion of his training, he was assigned to the Military Working Dog Unit (MWDU) at the Marine Corps Camp Pendleton Base. He deployed to Iraq in March 2004, and was awarded the Navy & Marine Corps Achievement Medal for his and Rex’s Iraq operations. His Medal Citation states: “From May to November 2004 he participated in 36 Combat Mission in Iraq, provided 350 hours of Explosive Detection Support, and performed over 200 Vehicle Searches in direct support of 2nd Battalion, 2nd Marine Regiment. Corporal Dowling performed these tasks many times at great personal risk as the lead element of his unit.”

Mike left the US military in the fall of 2010. His first book, Sergeant Rex: The Unbreakable Bond Between a Marine and His Military Working Dog, written with Damien Lewis, was published by Atria in the US in December 2011.