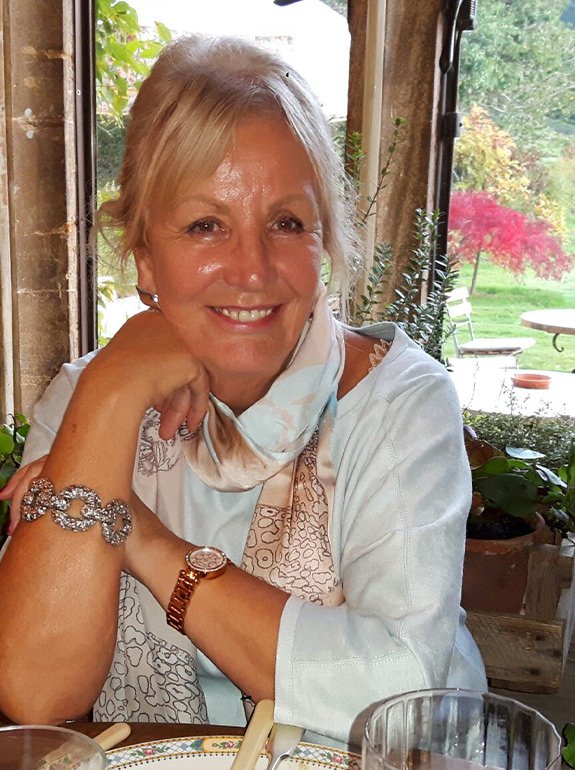 Lesley Pearse was born in Rochester, Kent and spent three years in a Roman Catholic Children’s home following the death of her mother when she was three. Her father, a Royal Marine married an ex-army nursing sister three years later and Lesley was reunited with her older brother and a new foster sister. Later her new sister and a new born baby boy were adopted by her parents and the family was added to from time to time by more foster children. Some brought Lesley  joy with their arrival. Some brought joy when they left.

When Lesley was eleven the family moved to South London and her father went to work for the post office.

Lesley was a story teller even then, as she says ‘It made up for being useless at any sport’, she would entertain her school friends with stories during wet dinner hours.

Her only ambition back then was to get married and have six children. Work was just something to pass the time until that happened. But after working in various offices as a lowly clerk, a children’s nanny, then eventually moving into the more glamorous work of Promotion and a spell as a Playboy Bunny, she decided six children was too many and settled for three.

Her writing career began when the youngest of her three daughters was born, first short stories and then books. ‘Georgia’ was the first to be published, based loosely on experiences she’d had with her second and ex husband, a musician during the ‘60’s.

‘Once I started writing I couldn’t stop,’ she says. ‘I felt I had hundreds of stories to tell.’

Now living in a cliff top house in Devon, alone with her King Charles Cavalier Stan, and soon to be a grandmother  again for the fourth time, she is working on her 25th book, ‘The Woman in the Wood’.

We're delighted to share that #Deception by @LesleyPearse has landed at No.4 in the Sunday Times bestsellers list this week!🥳

What an achievement for Lesley's 30th novel!📚 @MichaelJBooks

Tune suggestions please this afternoon, what’s on around the SW & chatting to @LesleyPearse about reaching her 30th book release. She shares some of the unusual jobs she did (what’s it like being a bunny girl?) before getting published at 49 📚@BBCDevon @bbcsomerset @BBCCornwall

Deception, the latest book by bestselling author @LesleyPearse and is available to request on NetGalley now!
http://netgal.ly/izLDmK

Deception by @LesleyPearse is available to request on NetGalley!

Deception by @LesleyPearse is out 7th July and available to pre-order now! https://www.amazon.co.uk/Deception-Lesley-Pearse/dp/0241544939

What do you do when your dream home becomes your worst nightmare?

Suspects by @LesleyPearse is out in paperback.

Her past was a lie. Now she must discover the truth.

We're so excited for the upcoming publication of Deception by @LesleyPearse!

If you can't wait till July, Deception is available to request on NetGalley http://netgal.ly/izLDmK

This was in @WaterstonesPicc and I nearly fell over when I saw it! Thank you whoever wrote this luvverly review (I’m back in London. My accent has reverted)

In Willow Close, everyone is a suspect...

Have you picked up your copy of Suspects, the latest book from bestselling author @LesleyPearse?

Grab your copy today and also get a first look at Lesley's next book, Deception, out 7th July 2022!