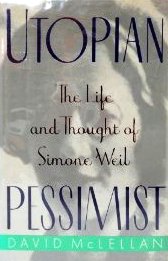 Utopian Pessimist: The Life and Thought of Simone Weil

McLellan’s robust intellectual biography dissolves the mists surrounding Weil (1909-1943), replacing the popular image of the ethereal Catholic mystic (born to Jewish parents) with that of a thinker anchored in economic and political realities. Weil was one of the first to describe the Soviet Union as a bureaucratic police state. She applied her anti-totalitarian critique to Nazism and to enlightened technocracy in the West. McLellan, author of several books on Marx, asserts that Weil was neither anorectic nor masochistic, as other biographers have maintained, and, while respecting her mystical bent, places prime emphasis on her social and philosophical thought. Weil put her ideas to the test through manual labor in Parisian factories and by joining the French Resistance. She emerges here as a fierce individualist, all of a piece, whose enthusiasms ran from the “lost” Languedoc civilization of 12th-century southern France to ways of making labor meaningful in the modern age.