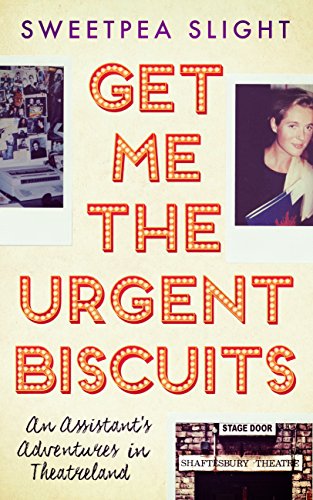 Get Me the Urgent Biscuits: An Assistant’s Adventures in Theatreland

At eighteen, after moving to London with dreams of becoming an actress, an impressionable girl who paints freckles on her face begins work experience in a West End theatre company. In between mail-outs and making cups of coffee she meets the formidable producer Thelma Holt. Within a fortnight Thelma has stolen her, cancelled her audition for RADA, sent her to evening classes to learn to type, organised a miniscule salary and renamed her. From that moment she becomes Sweetpea.

Her days are spent in an eccentric office where Alan Rickman or Vanessa Redgrave might pop in at any moment. Evenings are filled with the adrenaline of an opening-night performance or the chatter of a smart restaurant where casting for the next production is discussed. Existing somewhere between glamour and penury, Sweetpea finds herself surrounded by dynamic personalities and struggling to trust her own creative instincts. Over the years her apprenticeship takes in unusual demands, misbehaving actors, divinely inspired directors and a hot-air balloon ride with British theatre’s finest.

GET ME THE URGENT BISCUITS is a keenly observed memoir about the vanishing world of London’s West End in the 1980s and 1990s, in which a young woman is swept into the orbit of a theatrical impresario. Shrewd, poignant and irresistibly funny, above all it is a coming-of-age story about the search for independence and an ode to the beguiling nature of theatre.