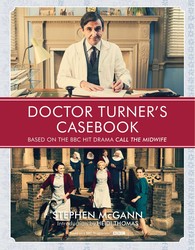 Call The Midwife is the BBC’s most popular drama ever – that is what viewing figures tell us with over ten million viewers per episode. The Christmas edition is always reviewed as a ‘must see’ event, just as important to some families as the Queen’s Speech.

All the principal actors are now household names and one in particular over the past two seasons has dramatically come to the front of the show – Doctor Turner, played by Stephen McGann. He is now seen as the lynchpin of the series, not only overseeing the many childbirths across episodes, but also dealing with a multitude of diseases that strike the young, as accurately portrayed by the show’s writer Heidi Thomas. Polio, meningitis, measles, scarlet fever and thalidomide have all been meticulously depicted on the show. This new book, will now reveal how a local doctor – such as Dr Turner – not only dealt with such cases, but also how he worked within the newly created National Health Service, as well as lived alongside his East End community. It will be a facsimile as well as a fictionalised diary from the character, all conceived and written by the show’s writer Heidi Thomas. Stephen McGann will also contribute his own narrative having studied for an MA in medical science. Beautifully designed, it will make a lovely present for any fan of the series, as well as those wishing to find out more about the history of what life was really like in this period.