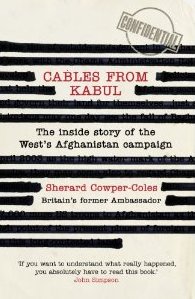 A frank and honest memoir by Britain’s former ambassador to Kabul which provides a unique, high-level insight into Western policy in Afghanistan.

For three years, from 2007 until 2010, Sherard Cowper-Coles was on the diplomatic frontline in Kabul as the Western policy towards Afghanistan sank deeper into crisis. First as the British Ambassador and, later, as the Foreign Secretary’s Special Representative, he witnessed at first hand a struggle that by 2010 was swallowing billions of pounds of taxpayers’ money, and had cost the lives of more than 2,000 American and 350 British soldiers, as well as tens of thousands of Afghans, in and out of uniform.

In ‘Cables from Kabul’ he gives the reader a ringside seat in the enfolding drama of the West’s Afghanistan mission. Packed full of colourful vignettes, the book lifts the lid on Embassy life, while at the same time providing a powerful critique of Western strategy. Why, he asks, are we focused on pacifying the Taliban in order to hand over power to a half-formed Afghan state that is neither willing nor able to govern?

The book sets out Sherard’s conviction that the Afghanistan project can be brought to a successful conclusion only if America is prepared to engage directly with its enemies and to deliver the massive political and diplomatic effort required to bring about conflict resolution.

Nobody is better placed to tell this story. Authoritiative, witty and astonishingly frank, ‘Cables from Kabul’ explains how we got into the quagmire of Afghanistan, and how we can get out of it.