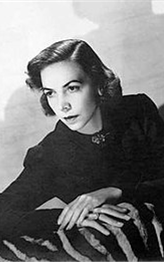 Virginia Cowles (1910-1983) was an author and journalist. Born in Vermont, USA, she became a well-known journalist in the 1930s with her columns appearing on both sides of the Atlantic. Her autobiography, Looking for Trouble (Faber Finds) covers with brio her reporting of the main current events between 1935 and 1940. During the Second World War she covered the Italian campaign, the liberation of Paris, and the Allied invasion of Germany.

In 1945 she married the politician and writer Aidan Crawley. She wrote many biographies including Winston Churchill; the Era and the Man and Edward VII and His Circle. In his memorial address, Nigel Nicolson recalled the first time he met her: ‘her appearance was doubly startling: that she should be there at all at so critical a moment; and that she was the most beautiful young woman on whom, until then, I had ever set my eyes.’