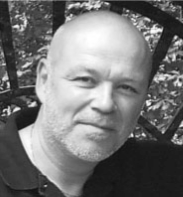 Simon Clark is the author of such highly-regarded novels as Nailed by the Heart, Darker, Blood Crazy, Vampyrrhic, Lucifer’s Ark and The Night of the Triffids (winner of a British Fantasy Society award). His short stories have appeared in an abundance of magazines and anthologies worldwide. SFX, Europe’s best-selling SF/Fantasy/Horror newsstand magazine, polled its readers on their favourite genre writers of all time. Simon comfortably hit the top 100: full details below.

Raised in a family of storytellers – family legend spoke of a stolen human skull buried beneath the Clark garage – Simon sold his first ghost story to a radio station in his teens for the princely sum of £15 then promptly spent many times that in heady celebration. Before becoming a full-time writer he held a variety of day jobs that have involved strawberry-picking, legal work, scripting video promos and generating multi-million pound projects.