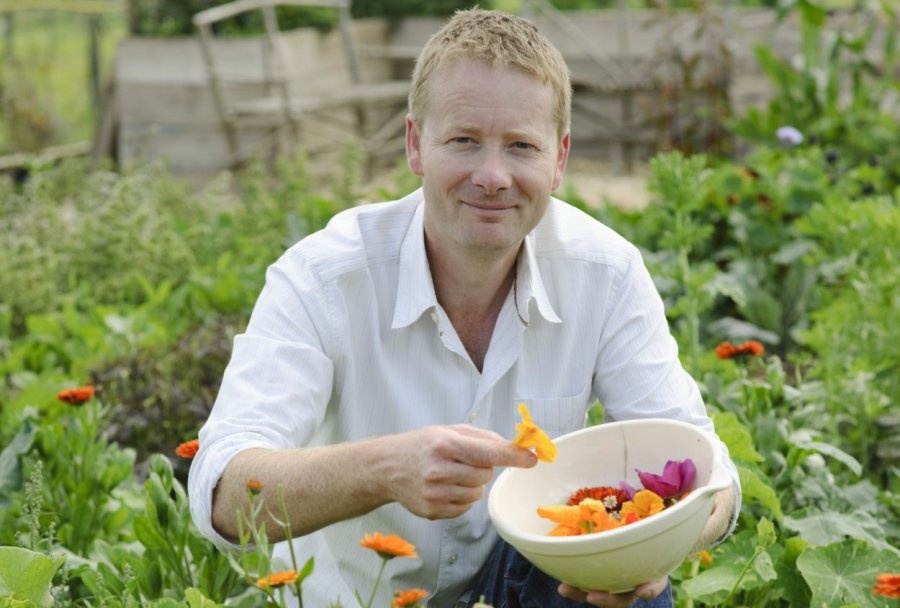 Mark is one of the country’s foremost food writers, known for his original take on all things edible. His A Year at Otter Farm, published in 2014, won the Andre Simon Food Book of the Year; A Taste of the Unexpected won the Guild of Food Writers Food Book of the Year 2011; and The New Kitchen Garden was published this spring. Mark has also written three River Cottage Handbooks, and is one of the authors of the forthcoming River Cottage Bible. He has won numerous Garden Media Guild awards for his writing and photography.

His unique smallholding, Otter Farm, is home to orchards of – among many other things – pecans, peaches, almonds, Szechuan pepper, apricots, a vineyard and the most delicious varieties of vegetables and herbs.  His idea is not only pioneering, it is also beautifully sustainable – taking advantage of climate change to grow low carbon food helps arrest its acceleration. It also means he’s lucky enough to spend most of his time eating, growing, writing and talking about food. Mark has now established his gardening and cookery school at Otter Farm, as well as running the blog relating all its daily joys.

He writes regular features for the Daily Telegraph, occasionally for the Observer, the Guardian and a host of other publications, and has a monthly column in The Simple Things. Mark’s award-winning Otter Farm blog has run for 10 years, has many thousands of followers.

Mark also led the Garden Team at River Cottage, appearing in the TV series, running courses and events at River Cottage HQ. He is one of the authors of the widely popular River Cottage series, of which the most recent is River Cottage A-Z: Our Favourite Ingredients and How to Cook Them, published in September 2016.

Can we just remind ourselves what all these 'noble' bell-ends are resigning from?

They've been propping up the clownshow for so long, they've managed to survive almost to the end.

There's not enough wire brush and bleach to clean these fuckers up.

That’ll be the excellent @lickedspoon launching her new book - a night of much love for one of the very best people, but aside from that I can’t imagine there’s anyone vaguely interested in food who would not love the recipes and writing in this book

Having a wonderful time at #RHSHamptonCourt in this beautiful weather. Looking forward to giving two #nodig talks today here at the Market Theatre. @MarkDiacono & Ollie from the Pig there too.

If you read my earlier post I have an update (https://www.liveauctioneers.com/item/5548832_241-beatles-the-hey-jude-bechstein-grand)

If you didn’t you might want read it first >>>

Last week a friend and I went in search of breakfast and may never found the most influential musical instrument in history. Tall claim, but…

Last week a friend and I went in search of breakfast and may never found the most influential musical instrument in history. Tall claim, but…

When JACK NICHOLSON won a BAFTA for Chinatown, he accepted the award from the set of ONE FLEW OVER THE CUCKOO'S NEST. One of the great acceptance speeches.

I’m doing garden cocktails in the afternoon too, so come along with a thirst

Morning. A window into a corner of my herb garden, with a recipe you might want to try https://markdiacono.substack.com/p/into-the-garden-scottish-lovage?sd=pf

Cover reveal (a beauty!) and thoughtful utterings over on @MarkDiacono’s new substack, which is proving very worth signing up to.
https://markdiacono.substack.com/p/spice-a-cooks-companion

Please read this short essay by ⁦@MarkDiacono⁩ about his new book SPICE/ a cook's companion (excited!) but also touching intelligently and thoughtfully on the issue of condemning experimentation with classic dishes of the world. https://markdiacono.substack.com/p/spice-a-cooks-companion

I adore everything about ⁦@lickedspoon⁩ - and this extract from her marvellous new book shows the brilliance of her kitchen tips and recipes… from today’s ⁦@TelegraphMag⁩ https://www.telegraph.co.uk/food-and-drink/features/three-best-summer-recipes-enjoy-al-fresco/

I’m no writer but thankfully @MarkDiacono is. One of the very best, in fact. So I shall simply say how proud we are to be publishing his Spice book this autumn @QuadrilleFood. 💥🌶💥🌶💥 https://twitter.com/MarkDiacono/status/1540253695262195712

I'm delighted to tell you that I have a new book flying later this year, and I wanted to share the cover with you. I hope you like it

Morning all. I'm writing over here, under The Imperfect Umbrella, and it would be a delight to have your company.

Tomorrow evening we host our summer solstice event @Grow_HQ to celebrate the longest day and the arrival of the new season veg in the HQ garden - and with @JBDuboisChef at the helm in the kitchen it will be Delish.. bookings 👇🏻 https://twitter.com/Grow_HQ/status/1539902428556001282