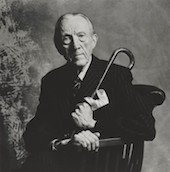 Liam O’Flaherty was an Irish novelist and short-story writer whose works combine brutal naturalism, psychological analysis, poetry, and biting satire. He was considered to be a leading figure of the Irish Renaissance, but, although a native Irish-speaker, he wrote almost exclusively in English.

In 1917 O’Flaherty abandoned his training for the priesthood and embarked on a varied career as a soldier in World War I and an international wanderer in South America, Canada, the US, and the Middle East. After coming back to Europe and taking part in revolutionary activities in Ireland, he settled in England where, destitute and jobless, he took to writing.

In 1923 O’Flaherty published his first novel, ‘Thy Neighbour’s Wife’. In 1925 he scored immediate success with his best-selling novel ‘The Informer’ which won him the 1925 James Tait Black Memorial Prize for fiction and was made into a film by the well-known director John Ford in 1935.

Most of O’Flaherty’s writing took place between 1928 and 1937, when he wrote 14 of his 16 novels as well as many of his short stories, a play, and a few non-fiction books.