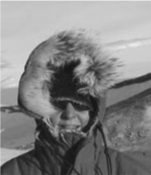 Lennard Bickel was born in 1913. A science writer for the Australian Broadcasting Corporation and The Australian in the 1960s, he was the only Australian journalist invited to witness the 1969 Apollo II moon landing from the launch site.

In 1970 Bickel was awarded a Commonwealth Literary Fellowship in order to write Rise Up To Life, a biography of Howard Florey, who pioneered the
development of penicillin. He subsequently wrote a number of other books that highlight remarkable human achievement: little-known epics of triumph over adversity, including This Accursed Land (1977), about Douglas Mawson’s struggle to stay alive in the Antarctic wilderness – ‘The greatest story of lone survival in polar exploration’, Sir Edmund Hillary – and Triumph Over Darkness: The Life of Louis Braille (1988).

In 1974 he was made a Knight of the Order of Mark Twain for his biography of Norman Borlaug, the Nobel-winning humanitarian scientist.