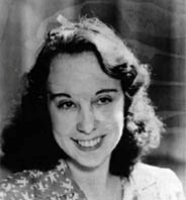 Helen McCloy was born in New York City in 1904. Her mother was writer Helen Worrell McCloy and father, William McCloy, was the long-time managing editor of the New York Evening Sun. Having read Sherlock Holmes as a young girl, McCloy retained an interest in mysteries and began to write them in the 1930s. Her first novel, Dance of Death, was published in 1933 and was followed by several other crime publications in the 1940s.

The most famous of McCloy’s characters was Dr Basil Willing, who subsequently appeared in twelve of her novels and several short stories. What can be considered as one of McCLoy’s masterpieces is the eighth Basil Willing novel, Through a Glass Darkly (1950), a supernatural puzzle in the tradition of Dickson Carr.

In the 1950s and 1960s McCloy was a co-author of review column for Connecticut newspapers and in 1950 she became the first woman to serve as president of Mystery Writers of America. In 1953 she received an Edgar from the same organization for her critiques.