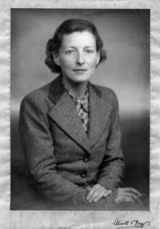 Donaldson grew up in the frivolous world of 1920s café society, yet she became a committed socialist. As the wife of Lord Donaldson who was on the board of both London Opera houses and was subsequently Minister for the Arts, Frances Donaldson was at the cultural centre of British life. Despite this, during the Second World War she took up farming and made a great success of it, subsequently being invited to broadcast in wartime and wrote several books about her experiences.

She wrote a series of prize-winning biographies including ‘Evelyn Waugh: Portrait of a Country Neighbour’, ‘The Marconi Scandal’, ‘King George VI’ and ‘Queen Elizabeth’, and ‘P. G. Wodehouse’.