Broadcaster O’Brien took home Best Political Book by a non-Parliamentarian for his book How to be Right: In A World Gone Wrong (W H Allen). The LBC presenter’s guide delves into how public opinion has been shaped in the modern day, where double standards exist, and how to ask the key questions that expose fallacies and inconsistencies in popular arguments.

Labour MP Reeves won the Best Non-Biographical Book by a Parliamentarian Award for Women of Westminster: The MPs who Changed Politics (I B Tauris), which charts the history of female Parliamentarians, exploring the political achievements of pioneering women over the past 100 years.

Best Biography or Memoir by a Parliamentarian went to Murray for This is Our Story: How the Fans Kept Their Hearts Beating (Luath Press), the story of how fans of Heart of Midlothian—Edinburgh’s oldest football club—donated their own money to save the club from ruin in 2014.

This year’s winners were selected from a shortlist featuring many familiar names, including David Cameron’s For the Record (William Collins), Truth to Power: 7 Ways to Call Time on BS by Jess Phillips (Monoray), Love Without End: A Story of Heloise and Abelard by Melvyn Bragg (Sceptre), and Lemn Sissay’s autobiography My Name is Why (Canongate).

The 2019 ceremony was originally scheduled for 4th December 2019 but was postponed owing to the general election. The 2020 Parliamentary Book Awards will take place later this year.

BA m.d. Meryl Halls said: “We are delighted to celebrate this year’s winning titles, which showcase the vast wealth of subjects tackled in political writing. Parliamentarians had an incredible range of titles to choose from this year, with a shortlist exploring everything from gender in politics to a 12th-century love story, from questions of identity and citizenship to the passion of football fans for their community. The Parliamentary Book Awards continue to demonstrate the contribution books make to the political discussions taking place today, underlining the importance of the link between the political sphere and the book world.”

PA c.e.o. Stephen Lotinga added: “From a strong shortlist we have three fantastic winners that showcase the variety of brilliant political writing in the UK today. From Ian Murray’s inspiring account of the importance and power of community; Rachel Reeves’ fascinating and informative look at the achievements of, and challenges faced by, female MPs in the past and now; and James O’Brien’s lively interrogation of fake news. Congratulations to the authors and publishers of these books which entertain but also offer insight into the political landscape.”

Tonight’s awards ceremony at the House of Commons was hosted by Dame Margaret Hodge MP, with Pippa Crerar, political editor of the Daily Mirror, returning to present for the second year. 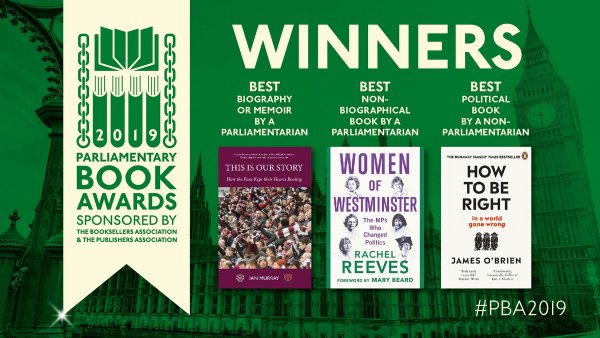