Johnny Herbert and Damon Hill’s book ‘Lights Out Full Throttle’ has been shortlisted for Sports Entertainment Book of the Year at the Telegraph Sports Book Awards 2021!

To tie in with the announcement, the public are now, for the first time, being asked to cast their votes online. The Autobiography of the Year, International Autobiography or the Year, Sports Entertainment of the Year, and Sports Health & Fitness Book of the Year will all be decided by a public vote.

Sports Book Awards founder and chairman David Willis said: ‘There has been an explosion of titles in the sports department of bookshops and this reflects the enormous and growing interest in the worlds of sport and games, fitness and leisure and mindfulness and meditation.”

Winners will all be announced on 20th September at a gala ceremony at London’s The Kia Oval. Tickets will be available to purchase online from 3rd August. 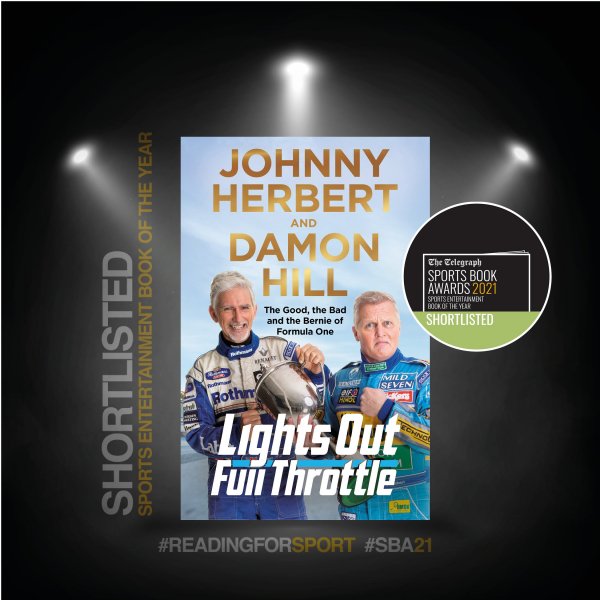 Drawing on a lifetime of sniffing petrol fumes, Lights Out, Full Throttle stands large over the landscape of Formula One and takes the temperature of the good, the bad and the ugly of the petrolhead’s paradise.

Having retired from racing, Johnny and Damon have become the one constant for passionate English F1 fans in a rapidly changing landscape. They have earned cult status as commentators and pundits, with viewers loving their unerring dedication to the sport’s greatness.

It offers F1 fans a tour of the sport – from Monaco to Silverstone; Johnny’s crowd surfing and Bernie’s burger bar; the genius of Adrian Newey and Colin Chapman; why Lewis Hamilton will never, ever move to Ferrari (probably); getting the yips; money; safety; what it’s like to have an out-of-body experience while driving a car in the pouring rain at 200 mph; and the future of the sport in the wake of Covid-19 and Black Lives Matter.

Whether you’re a fan of Nigel, Niki, Kimi or Britney, pine for the glory days of Brabham, Williams, Jim Clark and Fangio, or believe that Lewis is one year away from retiring as the GOAT, Lights Out, Full Throttle is the oily rag for the petrolhead fan to inhale while waiting for the racers to line up on the grid.