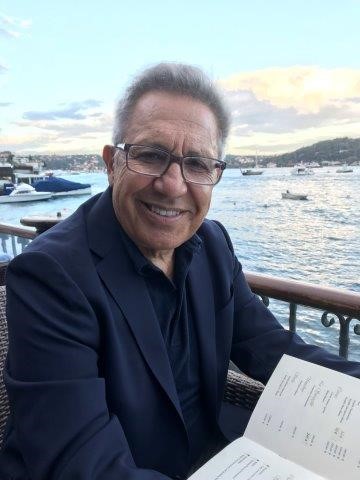 ZÜLFÜ LIVANELI (1946) is Turkey’s No.1 bestselling author and a highly acclaimed composer whose books have sold over 5 million copies in the last 10 years. Considered one of the most significant and influential public intellectuals of his time, he is known for his novels that interweave diverse social and historical backgrounds, figures, and incidents, including the critically acclaimed Serenade for Nadia, Leyla’s House, My Brother’s Story, and The Eunuch of Constantinople, which were translated into 37 languages, won numerous international literary awards both at home and abroad, and have been turned into movies, stage plays, and operas. He has also written several successful works of non-fiction, including With Gorbachev on Revolution, featuring the former Soviet President’s candid answers to Livaneli’s direct questions about Perestroika and the New World Order. He is a recipient of the Barnes & Noble’s Discovery of Great New Writers Award for his work tackling the highly charged subject of honour killings, and his latest novel Disquiet (2017) has sold more than 500,000 copies.

As a political activist, Livaneli was held under military detention during the coup of 1971. His cultural and political activities and contributions to world peace were recognized when he was appointed as a Goodwill Ambassador by UNESCO in 1995. In 2014, Livaneli received the Legion d’Honneur, the highest French order of merits.

As a musician, Livaneli has composed more than three hundred songs (many of them celebrated and enduring songs of protest), including a rhapsody recorded by London Symphony Orchestra, and a ballet. Livaneli has also written thirty film soundtracks including the soundtrack for “Yol” (The Path) which won the Palmes D’Or at the Cannes Film Festival. He has given numerous concerts throughout the world, including a performance of ′Mothers of The Disappeared′ with Bono in 2010. Livaneli has received music awards including “Best Album of the Year” (Greece), the “Edison Award” (Holland), “Best Album of the Year” (Music Critics Guild of Germany), and the “Premio Luigi Tenco” Best Songwriter Award (San Remo).

OTHER PRESS will be publishing Disquiet and Serenade for Nadia in the USA in Spring 2020.

Mercy is not an ointment for cruelty.

Disquiet transports the reader to the contemporary Middle East with a love story set against the recent atrocities committed by ISIS against the Yazidi people. Both a meditation on the nature of being human and an empathetic, probing look at the past and present reality of these lands of the Mesopotamian heritage, Disquiet is the groundbreaking first novel to tell of the experiences of the Yazidis fleeing ISIS to take refuge in Turkey.

Through the stories of Hussein from Mardin and the Yazidi girl, Meleknaz from Iraq, Disquiet gives a voice to the peoples, faiths, histories, and stories that have swept through this region over centuries.

Currently available in Turkish, forthcoming in English in 2020.

Set in modern-day Istanbul, Serenade tells the poignant story of Maximilian Wagner, an elderly German-born Harvard professor who revisits the scene of a tragedy where he has lost his beloved wife, Nadia, during the Second World War, when Struma–the ship carrying nearly 800 Jewish refugees from Romania to Palestine–was torpedoed by the Russians on the Black Sea Coast of Turkey.

“This book, which is a well-written thriller, is preoccupied with the past in order to tell the story of the Turkish present” – Christiane Schlötzer (Süddeutsche Zeitung )

“The title of this epic book is ‘Serenade’, but compositionally it is a symphony that reads like a classic.” – Achim Engelberg (Neue Zurcher Zeitung)

Currently available in Turkish, forthcoming in English in 2020.