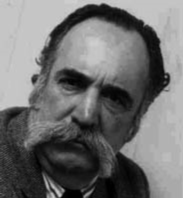 Saroyan was born in Fresno, California, the son of an Armenian immigrant, and spent his early years in an orphanage. He left school at fifteen, determined to become a writer, supporting himself by doing odd jobs. In 1934 Story magazine published The Daring Young Man On The Flying Trapeze about a starving writer trying to survive the Depression. Saroyan travelled through the Soviet Union and Europe meeting, for example, George Bernard Shaw and Charlie Chaplin, and recording his experiences in his memoirs and articles From 1958 he lived mainly in Paris, and continued writing until his death in 1981.

In addition to his vast output of novels and short stories, Saroyan was also a successful playwright. Among his best known plays is The Time Of Your Life, set in a waterfront saloon in San Francisco, for which Saroyan refused the Pulitzer Prize, on the grounds that commerce should not judge the arts.