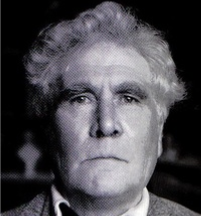 The brother of John Cowper Powys and Llewelyn Powys, T.F. Powys wrote eight novels of which Mr Weston’s Good Wine is the best-known. Whilst his brothers went to university, T.F. Powys attempted to make a career as a farmer. His works deal mainly with the hardships and brutalities of rural life. He claimed to love monotony, and almost never travelled. After his marriage in 1905, he settled in Dorset and lived as a recluse until the end of his life.

T.F. Powys was also a devoted Christian, albeit with unorthodox beliefs which were influenced by the ideas of pantheism and quietism. He was also deeply affected by the works of John Bunyan, Jonathan Swift, Thomas Hardy — and, of course, by the Bible.