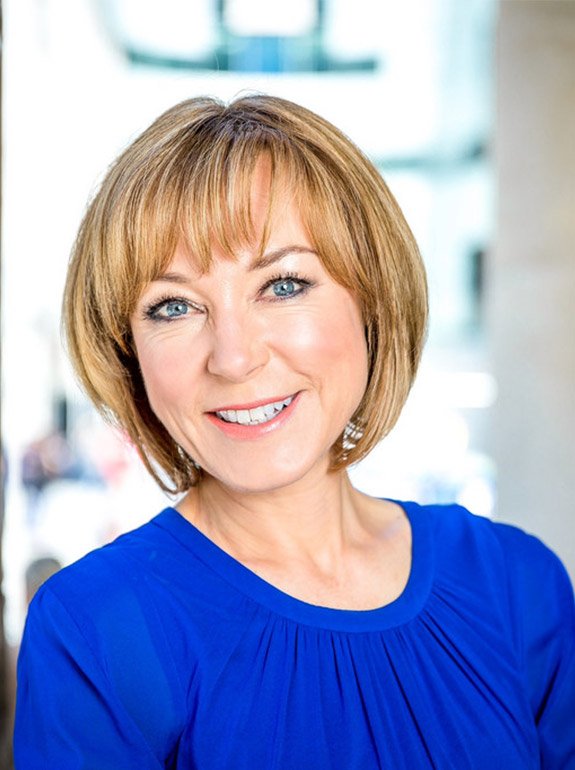 Sian Williams is a journalist, broadcaster and writer, with a background in psychology.

For more than thirty years, she has worked in daily broadcast news – as a reporter, producer and anchor of some of the BBC’s biggest shows. She is the main anchor on ITN/C5 ‘5 News’ and continuing to make network television and radio shows for the BBC, too.

She is also passionate about learning how our brains work and whether they can be re-wired, especially after a period of adversity or trauma.

Sian has an MSc in Psychology (Distinction), is a trained trauma assessor and has made two Radio 4 series on the mind and the brain, ‘The Thought Chamber’ and ‘How to Build a Better Brain’. The latter was described by The Psychologist magazine as ‘touching and illuminating, a great listen’.

The latest, a R4 documentary on ‘The Science of Resilience’ airs soon.

Her book ‘Rise: Surviving and Thriving after Trauma’ is out at the beginning of June. It’s a personal story of how we can rebuild after a traumatic event shatters our life. It’s illustrated by testimony (including her own) and backed up by science.

What the Papers Say:

“Sian is… valued as a political interviewer” Daily Mail.

“Gordon Brown didn’t expect to be grilled by Sian Williams on his untrue claim that he has lowered that national debt, Sian challenged him, rightly” Fraser Nelson, Spectator

“Modern BBC newsreaders like Huw Edwards, George Alagiagh and Sian Williams have impeccable journalistic credentials. They wade through reams of wire copy and speak to correspondents themselves before writing cues, rather than reading out loud, stuff that’s been written for them” Brian Viner, Independent

“Sad news indeed that the wonderful Sian Williams is quitting BBC Breakfast when the programme moves North, despite pulling double the audience of its rival Daybreak” Amanda Platell, Daily Mail

“The Queen of the Breakfast Sofa” Peter Preston, Observer

“Breakfast TV’s answer to Anna Wintour..her controlled sass is as much a part (of the programme) as the red sofa or the Breakfast logo” Imogen Fox, Guardian

“The departure of popular Sian will be a huge blow to BBC bosses..she and Bill Turnbull have an army of fans” Daily Mirror

“For the past decade, she has been the doyenne of the BBC’s popular Breakfast show… the show has doubled its audience since she joined” Polly Dunbar, Daily Mail

1990 – 1997: Editor R4 Specials. Budgets, Local and European Election coverage. 1992, special programme following the then Governor of Arkansas, Bill Clinton, as he launched his campaign to be US President. Also live programmes on the release of Beirut hostages and the Moscow riots as Yeltsin stormed Parliament. During the Bosnian peace talks, secured an exclusive interview with Radovan Karadic, the Bosnian Serb war criminal.

Noticing the ‘wine witch’ and becoming #sobercurious.
Life without #alcohol with @janeyleegrace on
#MindMatters @5_News @channel5_tv
And thanks for the podcast trail @mrdanwalker!
http://pod.fo/e/141763

Essential listening if you want to understand eating disorders from the perspective of the person living with the condition.
@sianwilliams100
#anorexia https://www.bbc.co.uk/sounds/play/m001dndw?partner=uk.co.bbc&origin=share-mobile

.@campbellclaret on why it makes good business sense to prioritise #mentalhealth in the workplace👇

What an inspiring event! We are so proud to have been the charity partner for @TheSun’s #WhoCaresWins Awards for a second year running.
Huge congratulations to all the winners, including the incredible Dr Freda.💙 https://twitter.com/TheSun/status/1595440054758932489

Part of the audience - Peggy the #Wellbeing dog.

Chartered Psychologist @sianwilliams100 has welcomed delegates from 145 organisations to the #EmergencyServicesMentalHealth Symposium, who've come together to share learning & maximise the impact they can have on improving wellbeing in their workforces.

About to kick off with the #EmergencyServicesMentalHealth symposium. The longest hashtag on @Twitter today
Really important meeting of #ambulance, #police, #fire, #coastguard - all sharing key #mentalhealth tips to help the helpers.

I am not doing any signings or public events for the memoir, Tell Me Good Things, because it is all a bit too much; but there is this, with the wonderful Cariad Lloyd... https://twitter.com/thegriefcast/status/1595311285973008384

They met by chance, fell in love - but a change in the weather on the Blackpool sands transformed everything.
Jason and Liz 9am @bbcradio4 - it’s the last #LifeChanging of this series and it’s a goodie...!

We're celebrating our 5th birthday & one of the things we want to celebrate is the fantastic Dr Sian Williams. Sian's "Tips for Teachers" series offers quick, helpful tips for teachers to support children: http://bit.ly/3TUFJuK
.
@sianwilliams100 #childrensMentalHealth

A sea of red, a stadium full of emotion. And they SANG, with hearts bursting and tears in their eyes.
Pob lwc 🏴󠁧󠁢󠁷󠁬󠁳󠁿
#walesvsUSA
(RT - autocorrect made my Welsh even worse!)

What a joy it was to chat with @revkatebottley and @jasonmohammad on @BBCRadio2 this morning.
Talked about gratitude, hope, resilience - great music, lovely people, a little burst of happiness on a wet Sunday x

Fantastic resource from @HeadlinesNet on vicarious trauma and how to deal with it – for journalists but also any of us who are exposed to traumatic content and/or the suffering of others.

Thanks to the emergency services - you run towards danger and that can be tough on your #mentalhealth.
Looking forward to hosting this and learning more from you
#trauma @firefighters999 @policecareuk @AACE_org

Sometimes, someone else’s words help with the day.
‘In the midst of winter, I found within me, an invincible summer’ - Camus.
Hang onto your invincible summer. It’s there. It might feel small and buried under the cold and rain, but there’s sunlight in there, and it’s yours.