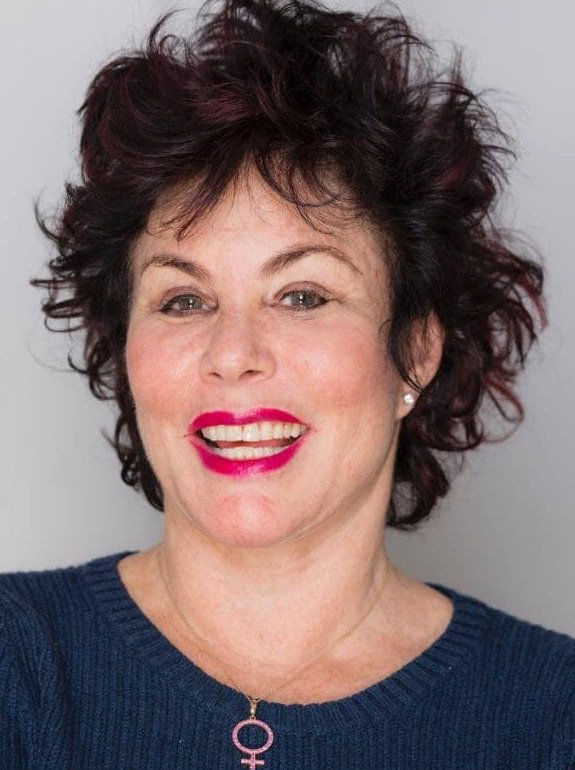 Arriving in Britain from the United States in 1977, Ruby Wax began her acting career with the Royal Shakespeare Company.  She went on to write and perform in her own hugely popular television programmes for the BBC and Channel 4 and was Script Editor on all series of Absolutely Fabulous. She has also worked as a stand-up comedian.

She has a Masters degree in Mindfulness-based Cognitive Therapy from the University of Oxford and spoke at TEDGlobal. Ruby has become the poster girl for mental illness in the UK.

Ruby regularly speaks of her keenness to normalize mental health by talking openly about it. She describes her experience of trying to keep anxieties under control, but finding out she simply couldn’t cope after becoming famous. Her show Sane New World revolves around the fact that one in four people suffer a mental health problem at some time in their lives.

Sane New World: Taming The Mind, Ruby’s non-fiction work on mental health and mindfulness, was published by Hodder on June 6th 2013 and is a Sunday Times No. 1 Bestseller. The paperback was published in 2014. A Mindfulness Guide for the Frazzled was published 7th January 2016 by Penguin Life.

In 2017 Ruby appeared on BBC One’s Who Do You Think You Are?

“Ruby Wax was the latest celebrity to rummage around in her ancestry… what unfolded was a gut-punching story of Jewish persecution and mental illness.” – Michael Hogan for The Telegraph.

Late to the @Rubywax Frazzled party, but it was worth the wait. Fav quote so far: 'If orgasms went on forever, we'd never get anything done.' So true! 📖

Had the pleasure of explaining rewilding to two people I never imagined I’d meet last night when out with @Broughton_Hall team. The inimitable and hilarious @Rubywax and a really humble true gent from the world of music @RealTimBooth @wearejames. Nature and wellbeing the key link

You cannot beat this book when you are having a bad time with those voices in your head. I have read it so many times. Given it to many people struggling. Thank you @Rubywax for being out there from the early days being honest and being a great source of help and laughter.

With @siblings_comedy getting ready for @edfringe

Not just taller, but funnier.

Tickets to their show are here: https://tickets.edfringe.com/whats-on/siblings-siblage

Saw the fabulous @siblingscomedy trying out their new stuff @thepleasance with @rubywax - their show dates before #edinburgh are in second photo. I totally lost it in laughter 😂 - they’re brilliant go see. ♥️❤️♥️ https://www.instagram.com/p/CfNEeqctyN8/?igshid=YTgzYjQ4ZTY=

I have gone on about stopping the stigma for mental illness for about 15 years; writing books, performing in theatre shows and speaking at businesses.
Over the years I’ve asked people suffering from both physical and mental problems which is worse…
/1

Our #AgeAtWork on-demand conference keynote speaker, @Rubywax, shares her view of the world. Ruby has an optimistic insight into how businesses that value people of all ages really do hold a key to success. Watch here: http://ow.ly/peXu50JwSaR @TNLComFundScot

I’ve been channelling Picasso recently. One is the real thing, one is painted by me.

Can you tell which is which ?

Woooow It’s a cracking 5 STARS for Siblings & @samiabuwardeh for 2022 @brightonfringe !!! This show is full of stuff in our new shows which are now on sale for @edfringe if you wana early 🎟.

@siblings_comedy was fucking hilariousss at Brighton Fringe tonight. The silliest of the silly

My next read
A bit of me time 🙂
⁦@Rubywax⁩

A great idea from @Rubywax. Instead of 'Y'aright?' etc - try, 'What's the weather condition inside your head?'. Me right now: mostly sunny spells with a few overcast periods and a high pollen count. https://twitter.com/s_southey/status/1524039028420628484

The hardest part about writing a book is the idea, because you want to go where no man or woman had tread.

The most fun part is when you write, “The End”.

This night will be so much fun don’t miss out it’s ONE NIGHT ONLY!