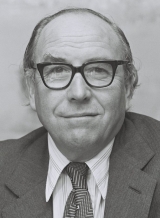 Roy Harris Jenkins was born the son of a Welsh coal-miner and trade unionist, educated at the University of Oxford, and served as an intelligence officer during the Second World War.

Jenkins was elected to parliament as a Labour MP in 1948 and went on to serve as both Chancellor of the Exchequer and Home Secretary under the Labour Governments of Harold Wilson and James Callaghan. As Home Secretary he drove through the decriminalisation of homosexuality and the legalisation of abortion, abolished theatre censorship and introduced the first legislation to outlaw discrimination on grounds of both race and gender.

From 1977-81, Jenkins was the President of the European Commission. He was the prime mover in the creation of the Social Democratic Party and its first leader. He became Chancellor of Oxford University, and was awarded the Order of Merit.

In addition to his political career he was also a noted historian, biographer and writer. His autobiography, ‘A Life at the Centre’  (1991) is regarded as one of the best autobiographies of the later 20th century, which “will be read with pleasure long after most examples of the genre have been forgotten” (The Guardian).