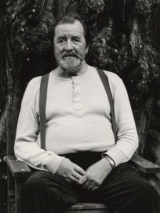 Robert Bolt was an English screenwriter and dramatist noted for his epic screenplays which won him two Academy Awards.

Bolt began work in 1941 for an insurance company, attended the University of Manchester in 1943, and then served in the Royal Air Force and the army during World War II. After earning a BA in History, he worked as a school teacher until 1958, when the success of his play ‘Flowering Cherry’ meant he could fully devote himself to writing. Bolt’s most successful play was ‘A Man for All Seasons’, a study of the fatal struggle between Henry VIII of England and his lord chancellor, Sir Thomas More, over issues of religion, power, and conscience.

Bolt wrote the screenplays for director David Lean’s epic films ‘Lawrence of Arabia’ & ‘Doctor Zhivago’ and subsequently adapted ‘A Man for All Seasons’ for director Fred Zinnemann’s film version of the play in 1966.

His other screenplays included ‘Ryan’s Daughter’, which was directed by Lean; ‘Lady Caroline Lamb’, which Bolt himself directed; ‘The Bounty’; and ‘The Mission’. The most successful of Bolt’s later plays was ‘Vivat! Vivat Regina!’.