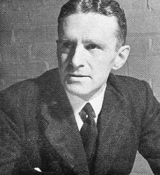 Norman Collins was a British writer, and later a radio and television executive, who became one of the major figures behind the establishment of the Independent Television (ITV) network in the UK. This was the first organisation to break the BBC’s broadcasting monopoly when it began transmitting in 1955.

Collins began his career as a novelist, publishing several successful works such as ‘London Belongs to Me’ (which was later filmed) in the 1930s while also working in broadcasting as a producer for BBC Radio. In 1946 he was appointed the Controller of the Light Programme, the BBC’s more populist, entertainment-based radio service which had grown out of the BBC Forces Programme, first established to entertain Allied troops, but which had also become hugely popular with domestic audiences during the Second World War.

At the Light Programme, he created one of the most iconic programmes in the history of British radio broadcasting: the adventure series ‘Dick Barton: Special Agent’, which ran for 711 episodes between 1946 and 1951, following the adventures of a dashing secret agent.