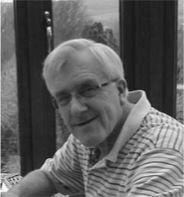 Nicholas Rhea is the pseudonym of former policeman and prolific writer, Peter N Walker who was born in Glaisdale, a Yorkshire Moors Village. The oldest of three sons born to an insurance agent and a teacher, he won a scholarship to Whitby Grammar School but left at 16 to become a police cadet. In 1956, he joined the North Yorkshire police force in Whitby.

He began to write seriously in the late 1950s after years of casual interest, having his first short story published in the Police Review. Continuing to rise through the ranks at the region’s Police Headquarters in Northallerton, he published his first novel, Carnaby and the Hijackers, in 1976.

Rhea is known for The Mark Pemberton Series and The Montague Pluke Series, inspired by his many years of police service but is most recognised for the Constable series which spawned the hugely successful TV show, Heartbeat. Located around Whitby, it ran for 18 seasons, over 350 episodes, and was broadcast internationally.

He retired in 1982 to concentrate on his writing and was given The Crime Writers’ Association’s John Creasey Award for services to the Association in 2007.