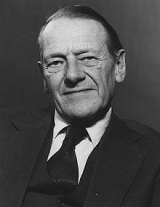 In 1950 he became a Professor of Political Science at the London School of Economics, where he remained for 26 years. He was an excellent teacher and writer, producing extensive studies of notable philosophers such as Sartre and Rousseau, winning the 1957 James Tait Black Memorial Prize for his biography on John Locke. He also wrote scripts for the BBC and several detective novels.

In the 1970s he moved to Florence, Italy, where he was a Professor of Political Theory at the European University Institute.

He died in 1993 while recording a programme about Baroness Thatcher’s memoirs.