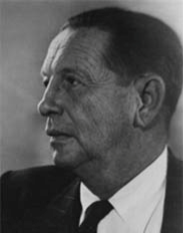 Louis Bromfield was born in Ohio and educated at Cornell and Columbia universities. An ambulance driver and interpreter in France during WW1, he was awarded the Croix de Guerre. On his return to the US he formed part of the original staff on Time magazine.

His first novel, The Green Bay Tree, was published in 1924. A year later, he moved to Paris with his family, and became friends with Scott Fitzgerald, Somerset Maugham and Edith Wharton. In 1938 the Bromfields returned to Ohio, where they bought a 1000-acre farm which became a productive showcase for Louis’s return to a simpler way of life, recording his experiences and knowledge in the classic Malabar Farm.

Bromfield’s reputation was established with his early novels, particularly the four books in the Escape series, a collection that depicted a changing America in which going against the norm had strong implications for the individual. A prolific and highly original writer, he received both the Pulitzer Prize for Early Autumn and the O. Henry Award for short fiction with Awake and Rehearse.