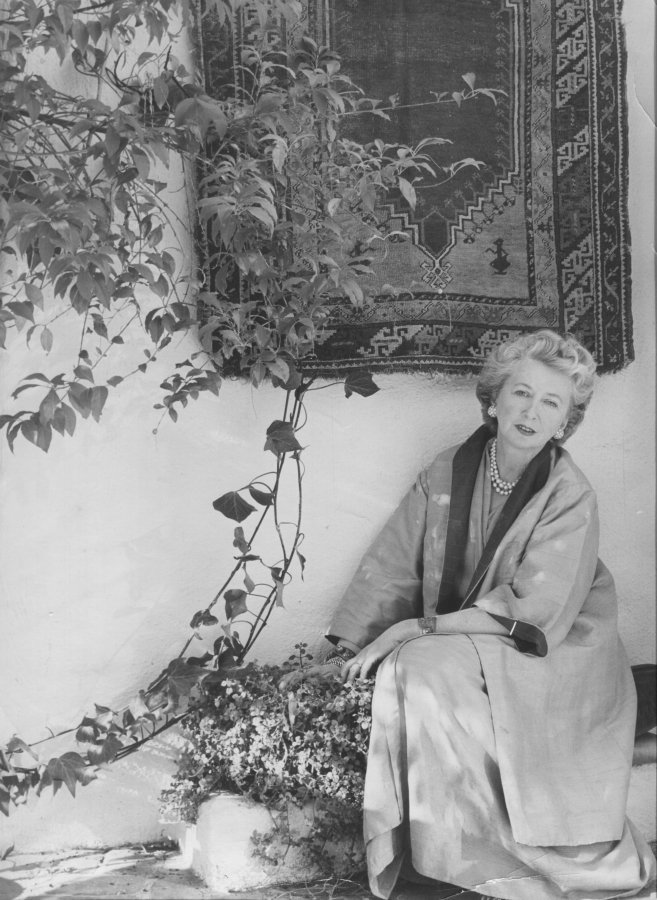 Lesley Blanch, historian and traveller, was the author of twelve books. A scholarly romantic, Blanch influenced and inspired generations of writers, readers and critics. Her first book pioneered a new type of biography and focused on four women who spectacularly defied convention. The Wilder Shores of Love was instantly acclaimed as a classic, becoming a worldwide bestseller, and has remained in print in English since its first publication in 1954.
Blanch was both ahead of her time and prescient in the way she attempted to bridge the gap between Western and Eastern culture. In April 1945 she married the French novelist-diplomat Romain Gary. Life in the French diplomatic service took them to the Balkans, Turkey, North Africa, Mexico and the USA.
The couple were divorced in 1962. Blanch continued to travel widely, inspired by the variety of cultures and landscapes in the East.
In later life, Blanch settled in Menton, in the South of France, where she died aged 102 in 2007.

#TamimAnsary’s Games Without Rules is one of the most balanced history books I’ve read on #Afghanistan. The author is witty as he objectively tells the story. Flows between strictly historic to personal experiences and political commentary. Ansary is our local Yuval Harari. 1/

Silent Heroes by Patricia Furstenberg.
A fascinating novel about US Marines in Afghanistan, their dogs and the lives of local people. Recommended! @PatFurstenberg
https://emmabbooks.com/silent-heroes-when-love-and-values-are-worth-fighting-for-by-patricia-furstenberg/
#BookRecommendations #HistoricalFiction

We hope all our #TimeTravelTalks friends are doing well! It is time for a weekend #HistoryHuddle!

What historical figures would you invite to a dinner party?

Dervla Murphy has often said that Afghanistan was her favourite country to travel through (in 1963) and we’ve been enjoying these maps from the first edition of her bestseller, Full Tilt: Ireland to India with a Bicycle @FullTilting @PGUK_Books

Thank you @Felcherman for this wonderful write-up of Mary Wortley Montagu's letters - as you say a woman ahead of her time, whose work on #innoculation will have led the way to save countless lives https://twitter.com/Felcherman/status/1509058713893625858

Happy birthday to us … Eland is 40 today and going as strong as ever with our back catalogue of greats such as Norman Lewis & Martha Gellhorn alongside our most recent reissues, E. M. Forster, Guy Kennaway & Veronica Doubleday. Review copies now available @PGUK_Books @guyken

Review | In the Line of Fire: Memories of a Documentary Filmmaker, Antony Thomas | Unicorn Publishing https://bookblast.com/blog/review-in-the-line-of-fire-memories-of-a-documentary-filmmaker-antony-thomas-unicorn-publishing/

Warm wishes for a wonderful holiday & an even better new year! Thank you for your support during this past tricky year. #HappyHolidays2021 to all!

"Part of Herbert’s genius lay in his willingness to reach for more idiosyncratic sources of inspiration. The Sabres of Paradise served as one of those sources ..." writes Will Collins @LAReviewofBooks @PFDAgents https://bit.ly/3nkHOld Tk u! 😀🙌

Revealing interview with the great Paul Auster by ⁦@ahmpreston⁩. ‘Five years of teaching and I still have a horror of creative writing. Either you have an imagination or you don’t; either you have a feel for language or you don’t’. Er, discuss. https://www.theguardian.com/books/2021/oct/02/paul-auster-burning-boy-stephen-crane-interview

I have news... Thrilled to say my second novel is launching with the fab @unbounders today. It's called JACOB'S ADVICE & is set in Paris 2015 & it's about... Well, watch this video to find out (& support if you like). Merci beaucoup! #JacobsAdvice #Paris https://unbound.com/books/jacobs-advice/

This - brought to my attention by ⁦@IanCallaway352⁩ - is like a catalogue of all the most English things that are the most likeable about the English: terrific stuff!
Tom Stoppard: A Life (Omnibus) - BBC Sounds https://www.bbc.co.uk/sounds/play/m000ztsg