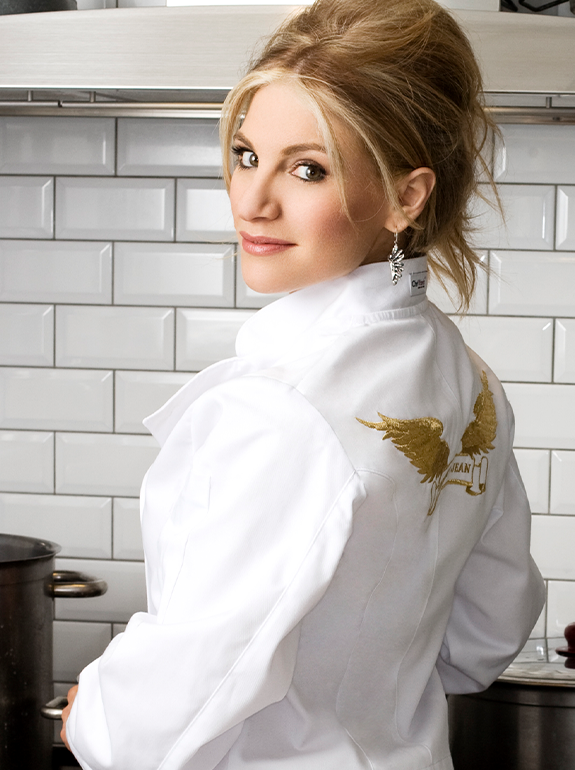 Persian, a pinch of Sephardic and the rest is topped up with an English-Irish mix, she’s the genetic equivalent of a Molotov cocktail. Laura began her professional cooking career working for Justin de Blank at his National Gallery restaurant in London. Detouring slightly via friends met at the stove Laura was offered an opportunity to train with Lynne Franks at her eponymous PR firm. Some great years in PR followed after which Laura was invited by MTV Europe to launch their Pan European and Middle East Special Events division where she worked with international stars all over the world. Laura left the world of MTV to move to Milan where she worked as a freelance event producer, producing among other things Italy’s first ever music festival and a couple of children. In 2002 Laura returned to London to run her family’s restaurant SANTINI following her father’s retirement but stepped away in 2008 to pursue her writing, television and food consultancy work. Laura is the world’s first kitchen agony aunt.

“I have made the journey from boardroom to cold room and back several times in the last twenty years, turning life’s ifs and and into pots and pans. Kitchens are about invention and the bubble and squeak of reinvention. That is the alchemy of cooking”.

It is the achievements of Laura Santtini over the past 12 months however that have set culinary tongues wagging. A “mistress of flavour” Laura has evolved from being a behind the scenes taste consultant and working mother into an award winning author, businesswoman and global marketing sensation. And it is a testament to Laura Santtini’s passion and belief that she sold her flat, moved into rented accommodation and invested all she had into her venture. From modest beginnings her pioneering range of food preparations has grown from a kitchen table idea into a singular global phenomenon. Having established herself as the world’s first Gastro Therapist for WFI, at the end of 2009 Laura published Easy Tasty Italian bringing a whole new dimension to cooking, earning Laura this year’s British Guild of Food Writers’ Jeremy Round Award for Best First Book. A brave first book, this contemporary and empowering study into transformational cooking and the relationship between emotions and cooking, chose words and illustrations as carefully as it did ingredients for the recipes:

“This book made the judges feel they were discovering something new.”

In the same year, the themes of culinary wizardry and intense flavour combinations that are central to the book, were translated into her innovative range of scratch cooking ingredients, Laura Santtini’s Spellbinding Flavours and in particular her successful and ground breaking embodiment of umami – the elusive fifth taste sensation -in her Taste #5 Umami Paste™. More than anything else it was Laura’s Taste #5 Umami Paste™ that catapulted her into the newspapers and taste consciousness of experts around the world. Laura’s eureka moment was to harness umami-packed natural ingredients from her Italian heritage and create the world’s first Umami Paste – a natural flavour bomb guaranteed to enhance any savoury dish. Laura Santtini makes food that makes global headlines. From the front page of the Daily Telegraph and the news pages of the Sun to BBC Breakfast news and Japanese TV, Taste #5 Umami Paste™ has indeed gone a long way but this is only one product within Laura Santtini’s Spellbinding Flavours range. Her Easy Tasty Magic collection with its Stardust Savoury Sprinkles, Culinary Elixirs, Latterday Rubs and Decorative Salts often use another of Laura’s culinary inspirations – “Food Bling” – edible noble metals such as gold and silver that enhance a cook’s creations, creating a feast for both the eyes and the palate. Laura’s Credit Crunch Chocolate made the front pages of the Wall Street Journal. Trend setters and taste makers Selfridges were the first to champion Laura Santtini’s Spellbinding Flavours. Before long Waitrose snapped up Taste # 5 Umami Paste™ too with one month’s supply selling out in two days and unprecedented waiting lists in store. The taste explosion continues – the US have welcomed Laura Santtini’s Spellbinding Flavours, Canada, Sweden and Denmark are selling Taste #5 Umami Paste™, several central European countries are already marketing it, a wholesale deal has been done so the top chefs in the land will soon be armed with the transformative paste and – perhaps most thrillingly of all, Japan, the home of Umami, takes delivery soon. Laura has emerged from being the food industry’s Cinderella, developing other people’s food flavours, into an astute business woman who has transformed an idea created from her kitchen in Battersea, London into a global food ingredient. Described by a top food industry expert as “Tracey Emin with a frying pan”, Laura continues to write and develop new products. Her second book was published by Quadrille in September 2011.

#inhumane I never thought I would see #children… https://www.instagram.com/p/BkNBDgpgYD_/?utm_source=ig_twitter_share&igshid=gmgkdhzj31lv

#dayslikethese #rainy #days we have to #digdeep and #find #sunshine #inside #within #sun… https://www.instagram.com/p/BhTrKa8lVG0/

#midnight #walk #home after #work #walking past harrods_store_london_ when I was #unexpectedly… https://www.instagram.com/p/Bg6NQhNlYUc/

#nice to get the #thumbsup from my #ginger this #morning #hope I see #jesus in my #toast… https://www.instagram.com/p/Bg0injRlda9/

#me #hanging with my #chicks #me in #yellow next to a the #basket I just wove. #basketweave… https://www.instagram.com/p/Bgzk3OEFM5B/

#today I found a #tiny #pair of #angel #wings on the #pavement #sidewalk #inpiration… https://www.instagram.com/p/BgjaBrPjbyk/

#monday #standin #stunt #bodydouble #ceo #piglet the #management will not be #tolerate any… https://www.instagram.com/p/BezvMa0DaGP/