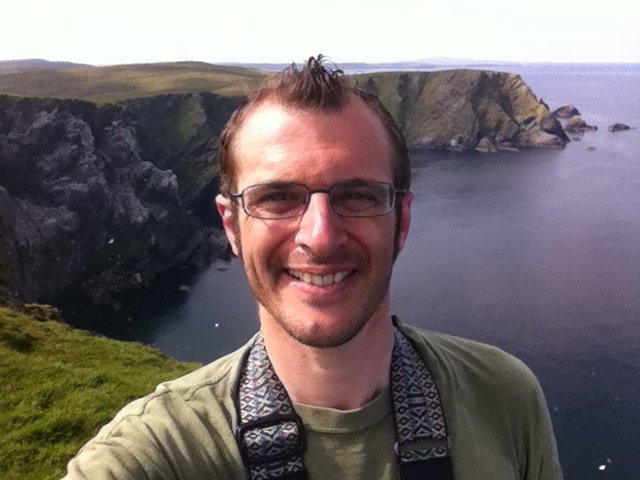 Jon Dunn is a natural history writer, photographer and wildlife tour guide based in the Shetland Isles, but with strong links in mainland Europe and North and South America that see him travelling widely in search of memorable wildlife encounters.

Author of the critically acclaimed “Orchid Summer” and “Britain’s Sea Mammals”, and co-author of “Britain’s Mammals“, he has written natural history and travel articles for several British magazines and newspapers, and writes the weekly Rare Bird Alert online Rarity Round-Up.

He credits a childhood living in the rural West Country of England for his lifelong interest in all things natural history based – a childhood spent exploring the water meadows and abandoned orchards of the Somerset Levels, and the droves and ancient woods of Dorset’s Blackmore Vale. Before long he had spread his wings further afield and was travelling widely around the British Isles and then further afield in search of birds, butterflies and orchids. A move to Shetland 15 years ago fulfilled his dream of living on the edges of civilisation in one of Europe’s great wild places.

He was once stalked by a Mountain Lion whilst bird-watching on edges of Mexico’s notorious Sierra Madre Occidental, but generally prefers experiencing wildlife on his own terms and not as part of the food chain.

I don't know who Cynthia was, but I'm fairly sure she would have been delighted to have this beautiful butterfly named after her. Somebody loved her, way back when.

5/7/22 - Literally hundreds of Dark Red Helleborines (Epipactis atrorubens) on the limestone of South Cumbria. I’m having a fab #orchidsummer #wherethewildflowersgrow

Each year my garden meadow in Sheffield reaches its peak in early July. This year, its 12th year, is the best ever. More Ringlets and Meadow Browns than ever before, both species breeding in the meadow. This is nearly 2 miles from the open countryside. Just shows what is possible

Almost a French endemic, today's highlight - albeit they made us work hard for them up and down some steep slopes in the Alps - False Mnestra Ringlet were greatly admired by all.

⁦@Channel4News⁩ tonight. Bird flu special report. We’re at the Bass Rock and Shetland assessing the effect on our seabird colonies and the potential for it to mutate and affect humans more widely than it already has.

Naturally, I'm relieved that I made it safely out, but am thinking of Bruno Pereira and @domphillips who I now hear did not. I was touched by the concern shown them by fishermen, nut gatherers + ordinary folk across NE Amazonia for these people who fought to preserve their home.

Thank you, @Channel4News, for covering this. And for presenting some of the more unpalatable and frightening truths about this pandemic.

Hoylake Beach is home to hundreds of species, many endangered, but @WirralCouncil are now asking whether people want to keep it or not. PLEASE take 2 minutes to tell Wirral Council we don’t want them to kill the wildlife across this amazing coastline

I could just about cope when it was adults washing up on the beaches, but now it's fledglings lying dead alongside their fathers! 343 Guillemots on Brora beach last night, including 19 fledglings... #avianflu

This winter we're aiming to plant 60 street trees in Nether Edge, Sharrow, Sharrow Vale and Carter Knowle areas of Sheffield, mainly on roads with no current street trees. We need a final £2700 of donations. If you can help, here's the crowdfunding link: https://gofund.me/82a7152b

First full day of the latest French Alps butterfly trip for @Greenwings - plenty of highlights, but a personal one was getting point blank views of compliant Purple Hairstreaks. When has this ever happened to me in the UK? Never!

Four years ago, the sight of Long-tailed Skuas hunting regularly over the moors and fields surrounding my #Shetland home became, for some days, a regular occurrence. Normally found in the Arctic during summer months, for a while these birds swapped a lemming diet for rabbits.

A female Brimstone found roosting in the late afternoon in the shelter of an oak leaf. Suddenly their wing shape, venation, ground colour and dark spotty markings all make perfect sense.