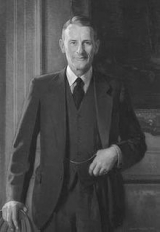 Sir John Cecil Masterman was a noted academic, sportsman and author. He was best known as chairman of the Twenty Committee, which during World War II ran the Double Cross System, the scheme that controlled double agents in Britain.

After World War II he returned to Oxford, becoming Provost of Worcester College (1946–61) and Vice-Chancellor of Oxford University during 1957 and 1958. Masterman was knighted for his services in 1959.