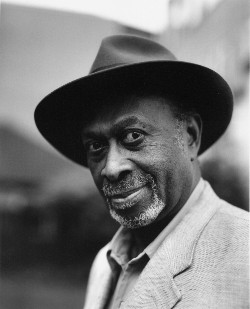 James Berry was born and brought up in a tiny seaside village in Jamaica. He learnt to read before he was four years old, mostly from the Bible, which he often read aloud to his mother’s friends. When he was 17, he went to work in America, but hated the way black people were treated there, and returned to Jamaica after four years. In 1948, he made his way to Britain, and took a job working for British Telecom.

One of the first black writers in Britain to achieve wider recognition, Berry rose to prominence in 1981 when he won the National Poetry Competition. His numerous books include two seminal anthologies of Caribbean poetry, Bluefoot Traveller (1976) and News for Babylon (Chatto, 1984).

He also published several books of poetry and short stories for children (from Hamish Hamilton, Puffin and Walker Books), and won many literary prizes, including the Smarties Prize (1987), the Signal Poetry Award (1989) and a Cholmondeley Award (1991). He was awarded the OBE in 1990.

The Future-Telling Lady and other stories (1991)