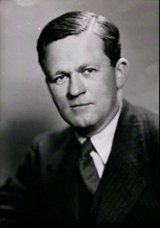 Hector Bolitho was born and educated in Auckland, New Zeland, the son of Henry and Ethelred Frances Bolitho. He travelled across the South Sea Islands in 1919 and then through New Zealand with the Prince of Wales in 1920. He travelled in Africa, Australia, Canada, America, and Germany in 1923, finally settling in Britain where he was to remain for the rest of his life.