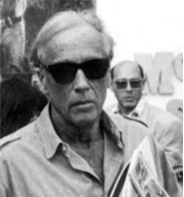 Hans Koning was a boy in Amsterdam when the Second World War broke out. As soon as he could he joined the resistance, and was awarded the Dutch Resistance Cross. He managed to escape to England and joined the British army.  He became one of its youngest Sergeants, and worked as a military interpreter.

After the war Hans Koning went back to Amsterdam, and his writing career began at a Dutch weekly magazine, where he was the editor until 1950. Following this he was invited to Indonesia to work in radio broadcasting, as the director of a culture show.

It was after his move to America in 1951 that he began writing novels.  His first one was The Affair, published by Knopf in 1958.  Over the next 40 years he wrote around 30 books, plays and translations, and adapted some of his novels for cinema.