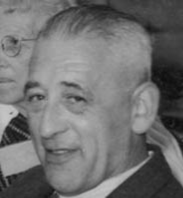 Eric Frank Russell was one of the most successful and innovative science fiction writers of the last century, who had a great influence on the genre at its height in the 1950s and 60s. His stories are humorous and full of character. His heroes are highly memorable, and tend to be at odds with authority, mocking and challenging their surroundings while engaged in dangerous adventures. Beneath the excitement lie deeper philosophical questions about humanity’s weaknesses, aspirations and future.

Eric Frank Russell was born into a military family in 1905 and spent most of his childhood in east Africa. He served with the RAF during World War II, then worked briefly as an engineer before taking up writing full time, and publishing his classic WASP in 1957. He was a founder member of the British Interplanetary Society and an active member of the Fortean society. It is rumoured, but not proven, that he invented the phrase “May you live in interesting times”, frequently cited as an ancient Chinese curse. In 2000 he became a posthumous inductee into the Science Fiction and Fantasy Hall of Fame.