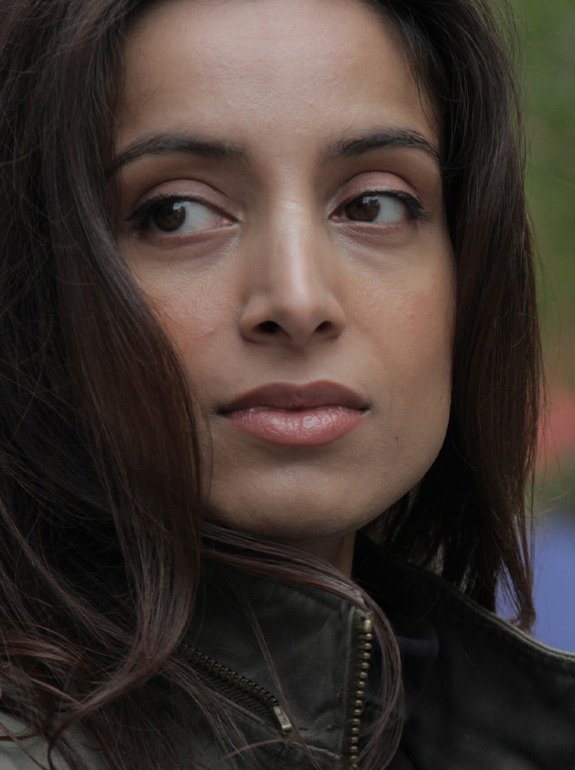 Deeyah Khan is an Emmy and Peabody award-winning documentary film director and founder of Fuuse, a media and arts company that puts women, people from minorities, and third-culture kids at the heart of telling their own stories.

In 2016, she became the first UNESCO Goodwill Ambassador for artistic freedom and creativity.  She has received many honours for her work supporting freedom of expression, human rights and peace including the Ossietzky prize, the University of Oslo’s Human Rights Award and the Peer Gynt Prize from the Parliament of Norway.

Born in Norway to immigrant parents of Pashtun and Punjabi ancestry, Deeyah’s experience of living between different cultures, both the beauty and the challenges, shapes her artistic vision. Her 2012 multi-award winning documentary Banaz: A Love Story chronicles the life and death of Banaz Mahmod, a young British Kurdish woman murdered by her family in a so-called honour killing.  Deeyah’s second film, the Grierson and Bafta award-nominated Jihad, involved two years of interviews and filming with Islamic extremists, convicted terrorists and former jihadis.

One of Fuuse’s recent initiatives, born of Deeyah’s own experiences, is sister-hood, a digital magazine and a series of live events spotlighting the voices of women of Muslim heritage. Deeyah has also produced a number of critically acclaimed albums, including Listen to the Banned, a compilation that brought together musicians from around the world who have been subject to persecution, censorship and imprisonment.

The focus of Deeyah’s work and access to voices that are often overlooked and misunderstood has led to increasing demand as a speaker at international human rights events and platforms including the United Nations. She was described by The Times of London thus: “To say Deeyah Khan is an inspiration is an understatement. She is one of the bravest, most indomitable women… facing down bullies and extremists with intelligence and unflinching spirit.”

America’s War on Abortion is Deeyah Khan’s BAFTA-winning documentary with ITV exploring one of the most divisive issues in American politics – abortion. Khan heads to the frontline to meet those most affected by America’s abortion wars.

Behind The Rage is Deeyah’s second documentary with ITV which asks a simple question: Is it possible to reduce endemic levels of male violence in America?

In 2018 I met @SchoepJeff, who was then the head of one of the largest white supremacist groups in the US. In a dialogue held by @NobelPeaceOslo, Jeff and I were given the opportunity to share the story of what resulted; a truly unexpected friendship.

“A confident director determined to get their material against almost impossible odds” and “documentary making at its most urgent & most necessary” - @sfcollinson wins the Director – Documentary/Factual & Non Drama award for Fearless: The Women Fighting Putin #RTSAwards

Congratulations @MunaLuqman for being honored as Visionary of the Year for your grassroots peacebuilding work in #Yemen.

“Inclusion of women isn’t about equality–it’s about giving voice to survivors, the youth, the women, the dire needs of the Yemeni people.” https://twitter.com/EuphratesTweet/status/1599860104244957212

Last month, @Deeyah_Khan spoke to @BBCWomansHour about her film ‘Behind The Rage’, which looks at domestic violence from a different angle.

The Tories trashed racism and sexism as ‘woke’ concerns. Now our public services are paying the price | Nesrine Malik https://www.theguardian.com/commentisfree/2022/dec/05/woke-racism-sexism-bullying-britain-frontline-tory-austerity-police-fire-nhs?CMP=share_btn_tw

@Deeyah_Khan Yes! Fill Twitter feeds with love, openness to learn and humanity rather than division, hate and point scoring.

Jeff and I were willing to sit across from each other and what transpired proved that dialogue, empathy and listening can produce positive results. Jeff has now left the white extremist movement and works to promote cohesion & understanding; I am proud to call him a brother.

Totally unexpected bit of news today thanks to @alexfarber @Broadcastnow The support is so appreciated.The ball is in employers courts.The industry has to change, diversity and inclusion across craft and tech roles have to become part of the conversation https://www.broadcastnow.co.uk/broadcasters/dubbing-mixer-emma-butt-industry-has-become-complacent-about-diversity/5177170.article