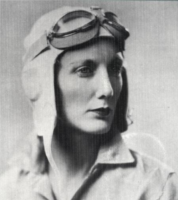 Beryl Markham grew up in Kenya, where her father bred and trained horses. She spoke several African languages and learnt to hunt with Masai warriors. She became a highly successful horse trainer and one of the most socially prominent women in Nairobi.

She was the first woman in Kenya to receive a commercial pilot’s license and worked for as a bush pilot, before undertaking a daring flight to England with Baron von Blixen.

Determined to win one of the big aviation prizes, she decided to fly solo from London to New York, against the prevailing winds – a feat never previously attempted. With no radio equipment, she set off in September 1936. After a couple of sightings she disappeared over Newfoundland. Then a phone call came through from Nova Scotia, where she had crashed in a peat bog due to a frozen fuel line. She became an international heroine.