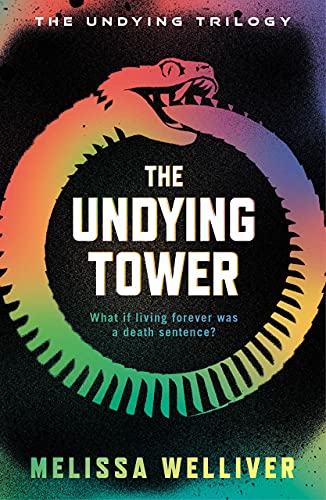 What if living forever was a death sentence?

Decades after the discovery that a small percentage of the population has stopped ageing, the Avalonia Zone is in crisis. From overpopulation to food shortages, the ‘Undying’ have been blamed for the state’s problems, banished to the fringes of society, and punished for every minor infraction.

When sixteen-year-old Sadie takes the fall for an attack by a rebel group, The Alchemists, she suddenly finds herself wrenched away from her quiet life and from her ailing father.

Armed with little help and even less knowledge, Sadie is thrust into a cold and cryptic ‘correctional facility’ – The Tower. Here she’ll have to rethink everything she’s been told about the Undying population in an attempt to save the life she knows, protect a group of unlikely friends, and give voice to the voiceless in a society on the brink of catastrophic upheaval.

The first in a daring dystopian trilogy, The Undying Tower descends into the dark side of immortality and champions fighting for what’s right, especially when the world is against you.

PRAISE FOR THE UNDYING TOWER

‘In the spirit of The Hunger Games but deeper, more heartfelt, even profound in its examination of the downsides of eternal life. I loved The Undying Tower. Melissa Welliver has arrived on the scene and attention should be paid.’ – Michael Grant, author of the GONE series

‘A richly developed dystopian world, with tight plotting and characters you can root for. I can’t wait to see what’s next for Sadie and the Avalonia Zone.’ – Lauren James, author of The Loneliest Girl in the Universe

‘[Melissa Welliver]’s created a unique world, an amazing “what if” scenario that I adored, and characters I rooted for and was genuinely excited about.’ – Naomi Gibson, author of Every Line of You

‘Honestly one of the best YA dystopian books I’ve ever read, so fast-paced and exciting. Sadie is one of the most compelling main characters in a long long time.’ – Ben Oliver, author of The Loop

‘I was hooked! The writing is fast-paced, throwing us instantly into action, with plenty of twists and unexpected reveals that truly made this a gripping read. The thing that most stood out to me about this book is it’s ability to discuss important themes of discrimination and inequality in a dystopian society that has hauntingly similar elements to our own.’ – Aneesa Marufu, author of The Balloon Thief