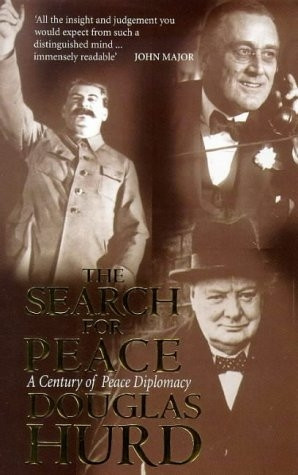 The Search for Peace: A Century of Peace Diplomacy

We live in a world of nation states, immortal and political entities that act as a focus for the loyalty of the citizen but cannot by themselves meet those citizens’ needs. As the history of our own continent illustrates, a Europe of nation states has bred a Europe of endemic warfare. Such has been the problem facing international diplomacy for nearly two hundred years.

Douglas Hurd traces the search for peace back to the Treaty of Vienna in 1815, focusing his attention on four key events – the Congress of Vienna, the Treaty of Versailles in 1919, the Yalta settlement of 1945 and the collapse of Communism.

He demonstrates how the diplomatic realism that kept Europe at peace for a century was destroyed by both American idealism at the end of the First World War and the accompanying rise of Nazism, Fascism and Marxism. Only by appreciating the lessons of the past, can we meet the new challenges presented by the tumultuous events of 1989, when the threat of nuclear war was replaced by the open wound of Bosnia.

Combining acute historical analysis with the unique insight of a former Foreign Secretary, THE SEARCH FOR PEACE is a major contribution to our understanding of international politics.