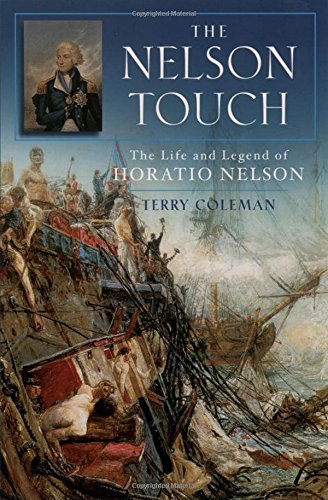 The Nelson Touch: The Life and Legend of Horatio Nelson

Admiral Horatio Nelson captures our imaginations like few other military figures. A mixture of tactical originality, raw courage, cruelty, and romantic passion, Nelson in action was daring and direct, a paramount naval genius and a natural born predator. Now, in The Nelson Touch, novelist Terry Coleman provides a superb portrait of Britain’s most revered naval figure.
Here is a vivid account of Nelson’s life, from his childhood and early career at sea―where a high-placed uncle helped speed his advancement to post captain―to gripping accounts of his greatest sea battles. Readers will witness the Battle of the Nile, where Nelson crushed a French squadron of thirteen ships of the line, and the Battle of Trafalgar, where he died at the moment of his greatest triumph. What emerges is a man of strength of mind amounting to genius, frequently generous, always fascinated with women, often uneasy with his superior officers, and absolutely fearless. Nelson was a ruthless commander, whose instinct was not just to defeat the enemy but to annihilate him.

Sure to appeal to readers of Patrick O’Brian and other seafaring fiction, as well as all military history and naval history buffs, this is a superbly written biography that gives readers the texture and feel of this magnificent life.